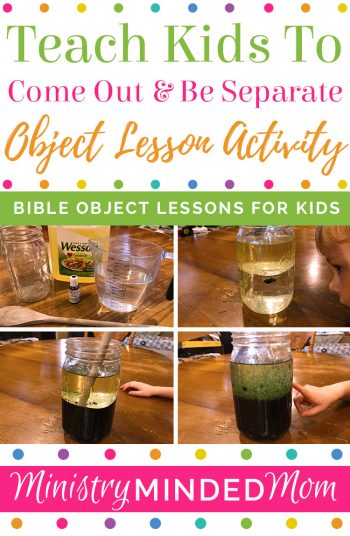 The Bible tells us in 2 Corinthians 6:17 to “Come out and be separate” from among sinners and in Romans 12:2 that we should “be not conformed to this world”. These are just two examples from the Bible where God instructs, and even goes as far as to warn us that it’s so important and vital as children of God to choose HIM over the WORLD. When everyone in the world says something is good but God says it is a sin, does that mean that we should follow the majority? This is what the Bible says…

No…God’s way is always the right way. And teaching kids about what happens when we mingle with the world is vital. When we get caught up in the world’s ways and the things of this world, we also get entangled in the sinful ways of the world too. We can’t have it any other way. God tells us to “be holy for He is holy” (1 Peter 1:16). 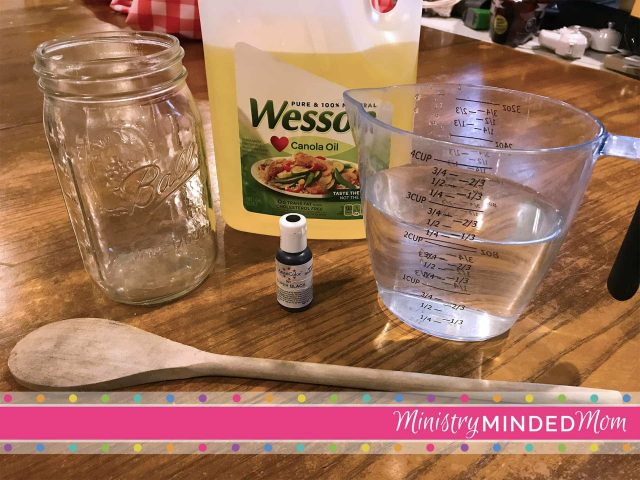 First gather all your supplies needed.

For the jar make sure it is completely clear and has a wide enough mouth to be able to stir rapidly. A drinking glass might work, but it might also be a bit too small, it really all depends on the size.

For the food coloring you can use black or green or red. Using black with the yellow oil makes the oil part a bit green, although that can be a good thing because it’s supposed to represent sin and that is “icky” so green kind of fits well. You can also use red, although I opted not to because I think of red more in terms of the blood of Jesus and a cleansing property rather than representing sin, which I think is better portrayed using something dark like black or a dark green.

Pour the water into the jar about halfway. Tell your child that the water here represents the world. God originally created the world to be pure and clean and without sin.

Next pour in the oil. As you do tell your child that the oil represents us, as followers of Christ.

Once the oil and water completely separate point out that there is a clear separation, just like there should be for those who love God. Share with them that the Bible says in 2 Corinthians 6:17 to “Come out and be separate” from the world, just like the oil did when it separated from the water, which represents the world.

Let your child watch how the food coloring spreads and tell them that just like the food coloring, the sin spread all over the entire world. But, point out that the sin passes right through the oil, just like how our sins are cleansed from us and “don’t stick” when we repent and believe on Jesus Christ. 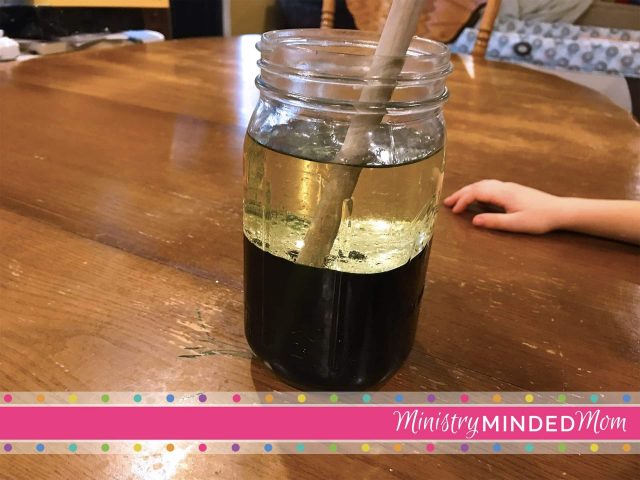 Let your child help you stir up the entire jar, if the coloring isn’t spreading enough then help them along. Stir very rapidly and continuously to spread out the food coloring. As you do, tell them that when we get caught up in the things of the world, we also get wrapped up in sin, because they are entangled together. We can’t be OF the world and not sin, this is why God tells us that we are to be IN the world, but not OF it.

Now stop stirring, and as the food coloring/water and oil separate again, talk about how when we do get mixed up in the world and sin, we just need to repent. We need to ask God for forgiveness, ask for our sins to be covered and paid for by the blood of Jesus, and finally TURN from them to the best of our ability.

As you’re telling them this the oil will be mostly separated and you can point to it and say that after we do this, God washes us clean of the sin that we got mixed up in, and He re-separates us from the world. 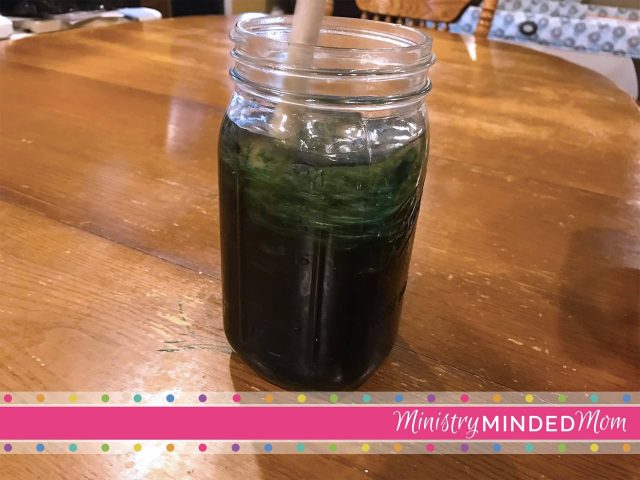 At this point you can re-stir up the jar again, and tell them that even though God forgives us and cleanses us, there are times when we still make mistakes and get caught back up in the world and sin. And nothing but repenting and being cleansed by the blood of Jesus can fix it. So if we make mistakes we always need to turn back to God, and then try again to come out and be separate to the best of our ability.

But with Jesus we are washed clean of all our sins. Because He loves us so. And because we love Him, we try our hardest to obey His commandments so we don’t get mixed up in sin again.

Teach your kids more about sin and forgiveness

I hope you and your children enjoy this sin object lesson! And if you liked this one, you’ll love my Sin Separates Us From God Balloon Object Lesson too! Just fill out the form below and I’ll send you a free printable object lesson booklet for it.

Hi friend! My name is Sarah. I’m a passionate follower of Jesus and a happily married mom of 3 little ones. I believe that raising your children is more than just a job. Homemaking and motherhood is a ministry unto the Lord. So I created Ministry Minded Mom to be a place to help my sister’s in Christ learn more about Christian parenting, Christian marriage, Biblical womanhood, Biblical homemaking, and most importantly how to do it all FOR GOD.